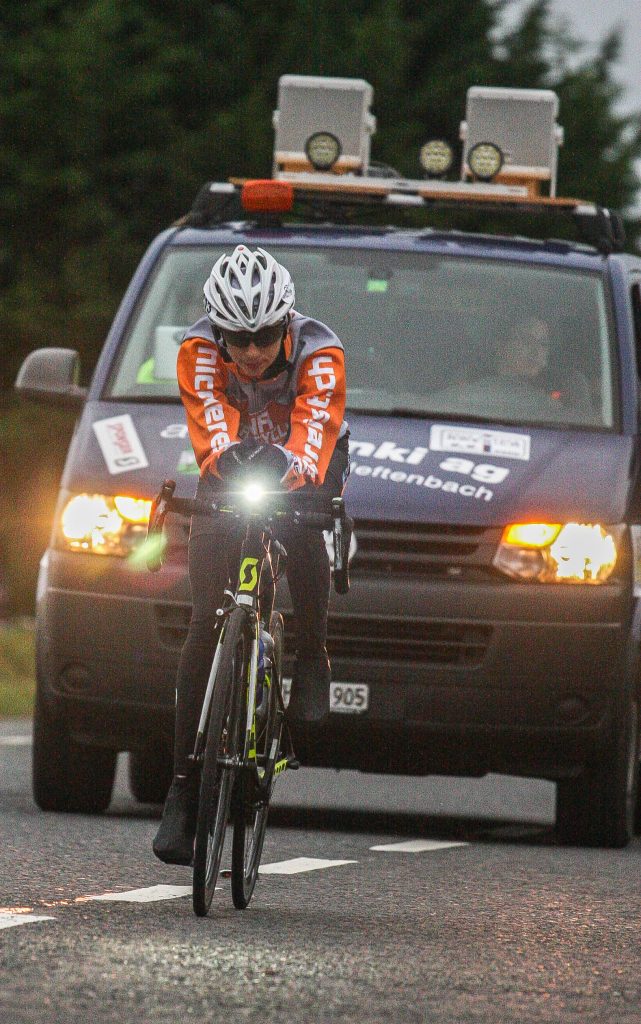 Nicole Reist has extended her advantage at the head of the Solo category in Race Around Ireland as former champion Valerio Zamboni moved from fourth to second on day four of Ireland’s toughest bike race.

As darkness descended over Munster, Reist was racing towards Kinsale in County Cork with her nearest rival Zamboni leaving Kenmare in neighbouring Kerry.

Zamboni’s deficit to Reist is just nine kilometres more than it was on Tuesday night but, while he and Reist have remained consistent, Henk Verouden and Pat Doocey have slipped back a little in the standings.

After his stop at the end of the section at Sneem Hotel, Verouden raced with renewed vigour and was just four kilometres behind Zamboni as nightfall approached.

Yorkshireman John Musgrove powered through the arduous hills in Kerry across Section 14 of the route, showing few symptoms of the length of time in the saddle on some of Ireland’s toughest cycling terrain to briefly head Verouden.

He, like many, chose Sneem Hotel for a rest stop and was fourth, still ahead of Erikur Ingi Johansson and Doocey.

The quartet of Pat Maher, John Dowd, Seamus Nash and Cathal Philips from Deenside Wheelers in County Kilkenny arrived in Moynalty with an eventual finishing time of 71hours and 43minutes with the next three squads on the road teams running close together more than 30km behind the winners.

Maher, Dowd and Nash were on the Teac Tom team that finished eighth in last year’s four-person class and shaved almost eight hours off their finishing time from 2016 this time round.

There was no stopping Team Aspect who, despite their relatively narrow final advantage led for almost the entire event which began in Trim, County Meath on Sunday afternoon.

It was the fourth fastest time in Race Around Ireland history and eclipsed last year’s winning time by three and a half hours.

Team Aspect were the first racers home from all classes in Race Around Ireland following the arrival of the riders in the shorter Irish Ultra Challenge race yesterday.

Following them across the line were second placed 4-person team The Ninety Niners who overcame a time penalty to scoop runner up spot.

The Navan Road Club derived team of Paul Kelly, Simon O’Dea, Michael Mills and Stephen O’Halloran were rarely more than a few kilometres ahead of St Tiernan’s CC and Team Veloroos on the road throughout the race.

St Tiernan’s made it a second podium in a row having finished second last year when Ciaran Ruane, Lawrence Clifford and Daragh O’Toole were also in their lineup. Joined this year by Dermot Doherty.

The Australian Veloroos team (with Irish influence) were fourth overall among the four-rider teams and set a new RAI record for women’s fours.