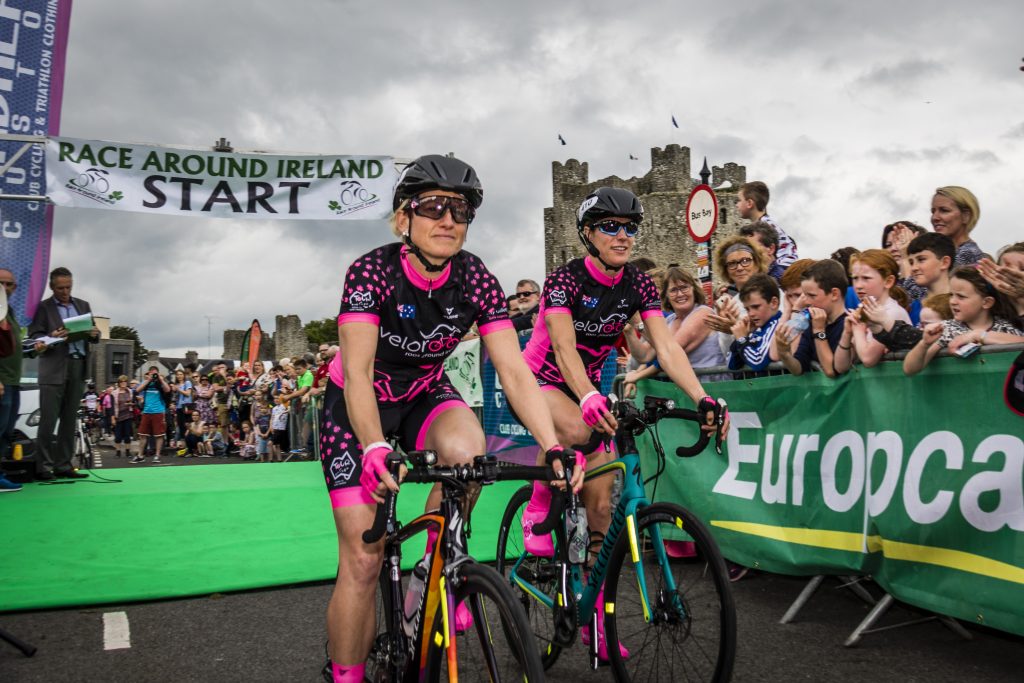 The Veloroos at the 2017 Start in Trim. Photo Ronnie Russell

With four months to go to the start of the tenth edition of Ireland’s toughest bike race, the organisers of Race Around Ireland are delighted to announce that the event will have a new Race HQ and Finish Line in Trim, County Meath.

Further strengthening the ties between Ireland’s toughest bike race and the popular Leinster town, Race Around Ireland will start in Trim for the seventh successive year and, for the first time, will also be headquartered there.

Once again, the start of Race Around Ireland will coincide with the Trim Salmon of Knowledge Festival which celebrates the rich history of the town and its links to Celtic legends and folklore.

Putting their own stamp on the heritage of world cycling, ultracycling stars from all over the world will depart from Trim at the start of their odyssey which takes in 22 counties on a non-stop ride which tests the very limits of human endurance.

The 2,158km bike race around the circumference of Ireland is renowned as one of the toughest sporting challenges in Europe, if not the world, and has secured a new finish location at Trim GAA Club close to the start line of its 10th edition.

The world-renowned event will draw the attention of bike fans the world over when it gets under way on 26th August and the developing bonds between the race and Trim will help boost local awareness and engagement with this extraordinary sporting challenge.

Race Around Ireland features the best ultracyclists from around the world as well as many of the most talented and dedicated bike riders in Ireland riding in the various categories from solo to two-person, four-person and eight-person squads.

Riders in the solo category will have endured 22-hour days in the saddle and less than two hours sleep a day in their quest to make it back to Trim ahead of their rivals and in time to beat the 5 Day cut off.

For some, the victory is the ultimate quest, for others the glory will simply be in surviving to the finish in time to beat the time cut.

Many of the riders and teams have an added charity imperative which helps drive them to their destination and the event is notable for the extraordinary camaraderie and sense of community which underpins the organisation.

Speaking at the announcement that Race Around Ireland is returning to his town, David Gorey, PRO Trim Tourism Network said:

“This is one of the toughest and most impressive sporting events in the world and to be able to welcome the competitors, support crews and organisers to Trim see them off during the Trim Salmon of Knowledge Festival again is an honour.

“Further reinforcing the bond between Trim and RAI, we’re delighted that the event will also to come to a conclusion in our town, completing the circle of the island and we wish all of the competitors well in their preparations.”

“It’s our honour for County Meath to host an event of such international prestige in an unbroken run since its beginning in 2009 and we’re delighted that the riders will be making their way back to Trim at the end of their tough week in the saddle.

“The race has proved to be a welcome boost to the county and we look forward to showcasing the Royal County to the cycling world.”

“We’re really looking forward to welcoming the Race Around Ireland competitors back to the birthplace of Ireland’s Ancient East.  They are supreme athletes with a spirit and courage which evokes memories of the warriors of Celtic legend and the rich history of the Boyne Valley which we honour with our festival. Our mission in TTN (Trim Tourism Network) is to get more people to Stay In Trim and to have RAI starting and finishing in Trim is fantastic.  We’d like to thank Trim GAA Club for working with us in a true spirit of cooperation.  We have some exciting enhancements to our festival that will add to the start of the race”

After many years of concluding in nearby Moynalty, the event headquarters and finish line will be close to the start line in Trim GAA Club.

Event organiser Alan Heary paid tribute to the Moynalty Steam Threshing Museum for their support in recent years and looks forward to a new beginning with a new end to the event in August.

“It’s been a great few years in Moynalty and we say thank you to our friends in the Moynalty Steam Threshing Muesum as we embark on a new journey with Trim GAA Club. Thank you, too, to the members of Moynalty CC for their unstinting and continuing support for the event.

“We’re bringing some of the world’s most impressive human beings to Trim in August. We hope that many people from Trim, Meath and the wider parts of Ireland will come out to cheer the riders on throughout the week.

“Both the quality and the quantity of riders is up on last year and it’s certainly getting set for the best ever edition of Race Around Ireland.”